Hi Everyone,
Welcome to Challenge 33 - 'Blue'
This week would like you to produce a card/project which is blue, the card/project can have a bit of other colour on it, but majority of it needs to be 'Blue'. Please note we are getting alot of people not following the rules and the challenge theme, so please make sure you understand before submitting your entry! One rule in particular that keeps being broken is not submitting more than 2 cards per challenge.  Your entries will be deleted if this happens, so really what is the point? Only 2 cards per blog please! Thankyou!! x
Here is my DT card: 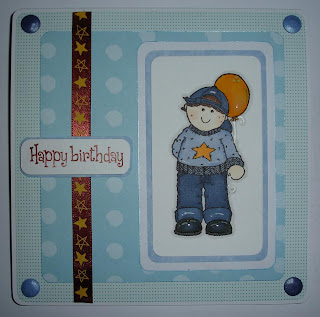 We are sponsored by CardMadFairy's Creations this week and they are giving the winner:
3 x Digital images of your choice
Good luck everyone, and I look forward to seeing what you come up with!

Sorry for the late post, totally forgot...oops!!  My excuse being that I am working on my wedding website/wedding stationary and basically in my own weddingy world! ahh!

So, this week it is everyones favourite challenge -  free for all!!!!!!! So, basically,  you can submit anything you like!


Please note we are only allowing max 2 entries per blog!  Don't be greedy now!  People submitting more than 2 entries will be removed altogether.

We are being sponsored this week by One Stop Card Crafts, who are offering £10 worth of Ranger Stickles.

Here is my DT entry for this weeks challenge: If you would like to enter then please follow the rules on our sidebar over at Pear Tree Designs Challenge Blog  and follow the challenge that has been set.

Please add your card/project to your blog and link it back to the challenge blog using the Mr Linky.
If you do not have a blog then you can still enter, just email your entry!

Pear Tree Designs Challenge 31 - We are Back!

Good Afternoon everyone and a HAPPY NEW YEAR to you all!

Over at Pear Tree Designs Challenge Blog we have challenge 31 well on it's way, with a couple of enteries already! Great!

Before I get into the challenge, I just wanted to welcome my new fellow DT memebers, Katrina and Lou who were chosen from the DT call just before Christmas.  Welcome girls, and looking forward to working with you!! xx

So, our first challenge of the year will be the theme 'circles', and we would like you to produce a card/project that consists of circles within your card/project. Easy peasy I would have thought!!

Here is my DT card for this weeks challenge: 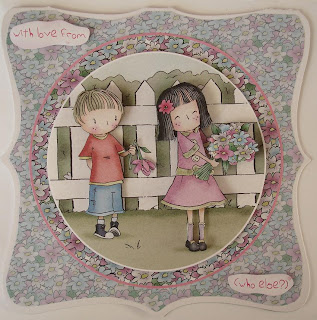 I got this decoupage set free with one of the many magazines I supscribe to.  Possibly Papercraft Essentials!?  I thought it was really cute, and I am just loving these 'elegant square' shaped cards right now.  I really think they add something special to the overall design of the card.  What do you think?
Donna will be personally sponsoring this challenge for this week,  and she will be giving the lucky winner a chance to win a  'GOODY BAG'!! A nice surprise then!  So what are you waiting for?  Enter our challenge before 4pm this Sunday for the chance to win!!

I can finally announce my fab news!

As some of you will know, I have been on the Rosemary Conley Diet trying to get down to my ideal weight, which was 5 stones lighter! It took me 18 months and I finally managed it in July, so I decided to apply for a Slimmer of the Year 2011 competition, that I saw being run in the magazine by Rosemary Conley.  I never thought in a million years I would get anywhere (which was probably part of the madness of me applying) but in October, while on holiday in Ibiza, I found out that I got through, along with 21 other men and women out of 100's of applications, and that I had to go collect my award THE DAY AFTER my holiday!! Stressed!!!  I had to also buy a few new outfits for photographs, so as soon as I got home from the airport, fortunately in the morning, I rushed to the shops!!

I had a good day up in Leicester, where the Rosemary Conley 'headquarters' are, and had my hair and make-up done, due to having photographs for promotional work, and various interviews!!

Anyway, I have officially been crowned Regional Slimmer of the Year 2011, and I am so proud of myself (for once!)  I feel like a totally different person, and on looking at old photos of myself, it's like looking at a stranger, and one I never intend to meet!  I will not ever go back to the 'old me'. 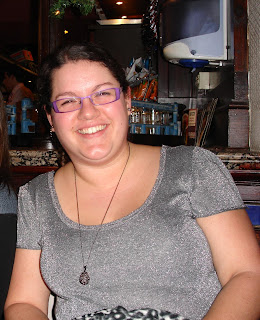 And this is the new me, in my 'Marketing' photo for Rosemary Conley in my region: 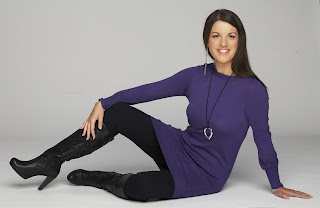 I have had a few interviews, one being with Rosemary Conley , and the other with my local radio station, Heart FM,  and they played my interview last Thursday afternoon, but I missed it, as I was told it would be the morning, as it was pre-recorded! Ugh!  But they have put something about me on there website.  So if you want to have a read of my story, take a look.
Tomorrow I will see for the first time, printed leaflets with the above picture on which have been posted all around my region (not at all embarrassing...! :oS) and my class instructor has asked me to post some out too, since I always do them for her! Oh dear!  I was hoping i'd get out of it. I was wrong!
Please take a look at the overall 10 Slimmers of the Year 2011, if you need lots of inspiration, as some of these people have lost over 10 stone in a year!! OMG!! It can be done!
They were amazing people to meet, and so so lovely, as were the other 10  Regional Slimmers who all had amazing stories of there weight battle journey.