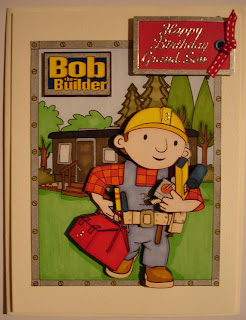 Mark's Uncle asked me to make a Bob the Builder card for his Grandson, Sam who is turning 3 at the end of May, and I thought instead of finding a picture on Google Images and then decoupaging it myself, why not print out a kiddies colouring page and have a bit of fun with my ProMarkers and then decoupage it!? I did have a bit of a 'claw' at the end of it from colouring in for a few hours, but I think it was worth it and it was fun! I'm not entirely sure how much to sell it for. It's always a bit difficult when its family and friends, isn't it? It must have taken me about 3 hours to make, is that ridiculously long? haha

It was lots of fun at my house this evening! We have a well established wasp nest right in the brick work next to my craft room windowsill outside, and I told Mark he had to get rid of it before my parents come over and stay on Sunday as my mum likes to have the window open at night and although the waspy's should be sleeping then, I don't think its worth the risk! So, as we have a conservatory below my room, you cant get a ladder to it, so poor Mark had to hang out of the window dressed head to toe in protective clothing in case the wasps decided to get rather angry once the foam was sprayed into there nice new home! He did look rather funny, and I wish I had taken a picture. I thought the netting over his face really added the finishing touch...haha! I think he managed to get most of the foam down the brick work rather than in the hole, so we will see if it works......watch this space! lol

Wow, im so pleased right now! I won Anna's 'April Tag Challenge' over on Craftbubble! Yipee!
It must have been such a difficult decision as everyones tags were gorgeous.
I can't wait to receive my prize next week...looks wonderful!

Thanks to Katie (aka baby-freckles) for the lovely stamped images she sent me the other week as well as my other goodies - shes such a sweetie! I have made this card for my friend's birthday which is coming up soon. She loved the last Magnolia card I sent her last time, so I thought it would be nice to send her another. I'm really pleased with this one, I was going to keep it myself! haha! Is that silly?
I'm really pleased with how I seem to be improving with my cards lately. And it's all thanks to Craftbubble and blogging! So many inspiring people to learn and get ideas from and the challenges and competitions really help to.

When I think back to my first card and how different it looks to my latest, I realise how far I've come! I remember being so proud of this card and it took me ages to decide what to do! hehe Looks fairly simple now! I still have it somewhere!
Anyway, bedtime for me, can't believe how late it is!

Well back on Craftbubble, Anna Davenport has a Flower Tag challenge and this is my entry! I thought the flower made a good sun! I'm still a massive fan of Magnolia, I don't seem to be using much else recently! tehehe! Loads of fab tags being entered, I'd hate to be Anna and have to choose the winner! Entries need to be in before 5pm today, so if your thinking of entering, you better get your skates on! Good Luck everyone who has entered! 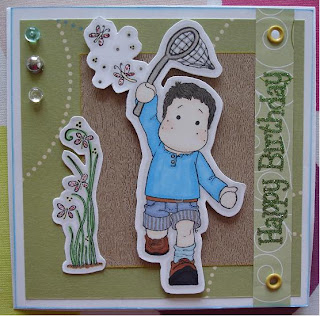 Just made this card for Mark as it's his 31st Birthday tomorrow! I am quite pleased with it, despite the nightmare I had with the glitter! I dropped it everywhere. I'm sure plenty of you have done this before so you know what a mess it makes! Ah well, it could have been worse!

I'm taking Mark out for a yummy Chinese buffet tomorrow evening, which is going to be very naughty as it's def not a low fat meal and I will put on what I lost this week at my Rosemary Conley class, I am sure, or more! Ah well, a treat every now and then won't hurt.........much! I am also having a BBQ on Saturday with Mark's family so I hope its a lovely day like last Saturday, but I bet it's not! ha!

Anyway, enough of me waffling on. I really should get back to doing some more card's!

Posted by Unknown at 4:58 pm No comments:

Finally getting to grips with my Craft Robo!

I spent most of today trying out all the new Craft Robo templates I've downloaded from www.UKScrapper.co.uk. It has been stressful and fun at the same time! The butterfly, made by Sylvia Fernie was my first successful template. I think it looks pretty cool! I've coloured the butterfly using my Brilliance Dew Drop ink stamps which have a nice shimmer effect. The backing paper was a freebie from Simply Cards and Paper craft Magazine. What do you think?

Susie's Blog Candy to celebrate the opening of Diecutdreams.co.uk

Congratulation's to Susie on the opening of her new online shop (link in side bar!) To celebrate this, Susie has some blog candy up for grabs. Go to http://sassydesignsbysusie.blogspot.com/ for your chance to get some candy!
Blog candy will run until Noon Tuesday 21st of April . The winners will be announced Tuesday evening, 21th April.

My first attempt at Cross Stitching! 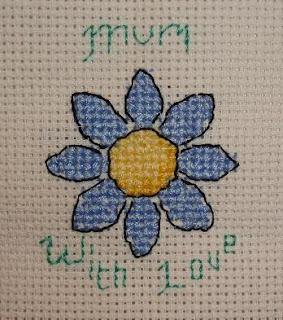 Well, I never thought I would see this day...........but, I have compleated my first cross stitch! yipeee! It's not perfect, but for a first go, I'm pretty pleased with it, and myself!! The black outline was tricky and the instructions didn't really tell me what to do, so its a bit messy unfortunately. It also didn't tell me what to do with the thread once you have finished, so I just doubled it under the loop of the last stitch....hope that's right?! hehe

So what do you think?